Yesterday I saw something on Twitter which made me cry.

I came across it several times and it made me cry every time. 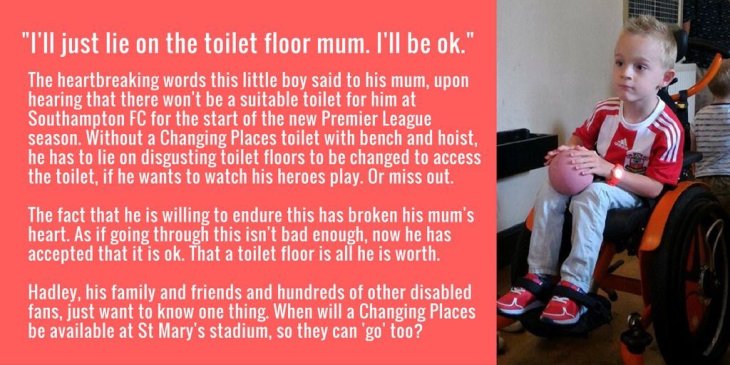 Hadley is a massive Southampton fan and his family have been asking the club to provide accessible toilet facilities with a hoist and changing bench for 3 years.

Like many children his age, Hadley is desperate to see his team play. So desperate that he is willing to accept that he does not matter.

That is how much he loves his team.

And that is what makes me cry.

This small boy has already accepted that this is his future.

If he wishes to do everyday things he has to accept that he doesn’t matter.

Twitter was filled with support for Hadley. As it should!

Although I saw one comment saying that Southampton FC were already meeting the minimum standards.

Maybe the players would be happy with national minimum wage?

Minimum standards are just that – the minimum requirement.

Not the best, not the ideal, not the desired, just the minimum.

Nobody celebrates the minimum standards!

For Hadley, the “minimum standard” toilets at his club are inaccessible.

So he is expected to find a way to manage in substandard toilets.

Hadley, you are worth more.

Southampton FC, are you really a minimum standards kind of club?

I heard that you were “The Saints”?

Please show every disabled fan that you are.

Show Hadley that he matters.

Take a look at Hadley’s Heroes See how long his family have been asking Southampton to care and see some of the other fans who also depend on these facilities.

Hadley represents so many fans, so many people.

Hadley is as able as anyone else to watch the match. He wears the strip, he cheers his team, he badgers his mum for anything Southampton FC related. He wants his season ticket.

His wheelchair doesn’t disable him but something as simple and fixable as a toilet does.

“To celebrate the start of the new Premier League season, Virgin Media will be offering a welcome drink to every supporter attending Saturday’s home game against Watford.”
Read more HERE

Not only will a free drink for every supporter cost a fair bit but those people having a drink are likely to need the toilet. Just like Hadley.

“It is the latest in a long line of exciting initiatives from Virgin Media to benefit the club’s supporters, and is all part of its commitment to being more than a shirt sponsor, with the company wanting to make the experience of following Saints and watching football at St Mary’s the best it can be.”

No mention of minimum standards.

22 thoughts on “No More Minimum Standards!”