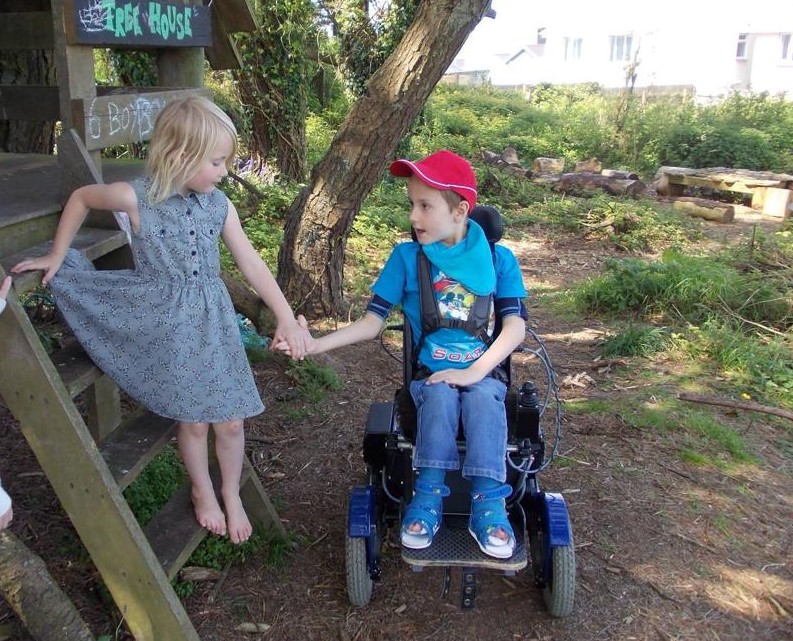 Four years ago we took the decision to remove Adam from school.

He had already been out of school for six months, recovering from surgery to correct a dislocated hip. The injury had happened at school and could have been avoided if only we had been listened to.

I couldn’t face sending him back.

It wasn’t just because of the injury. There had been many times where he had not been included or not been properly considered, like when I had been asked to collect him early so that his two support staff (funded through his Statement of Special Educational Needs to support him at all times on a 2:1 basis) could set up for the Christmas Fayre.

Because the Headteacher clearly thought that was a better use of their time.

My son was not as important as setting up the Christmas Fayre.

Sometimes you have to accept that no matter how hard you try (and we had tried) it just isn’t going to work.

The stress of making it work had taken a huge toll on our family life. My husband had started to dread me calling him at work because it would mean a new problem had occurred at school.

I dreaded having to go in to school. I hated having to argue for my son’s right to be there. It was a miserable time. I developed alopecia.

Adam was not learning and he was tired all the time, overwhelmed by the physical and emotional experience.

The children in his class were lovely to him, really kind and caring but he was not developing proper friendships with them. His support staff were also lovely and I know they cared deeply for him. But I never felt that the Head truly wanted him.

I will not bore you with the endless battle details but on one occasion, where I had complained that they had not included him on a class outing she told me that they had “even changed the toilets and car park for Adam yet all I did was complain”. I didn’t realise that it was okay to not include a child if you have upgraded your facilities!

You can change any physical difficulty of a school environment but you can’t always change attitudes.

So we decided to take him out of school for six weeks to give us time to find a different school.

I wanted to do the best I could for him whilst we were looking for a new school so I researched home education. I had anticipated that I might find one or two home educating families and had hoped that they would help me through.

What I found was hundreds of families home educating in Cornwall with huge numbers of them in my area.

We were welcomed warmly. The first time one of the mums organised a trip I was amazed at how easy it was. It was to a farm where there would be a tractor ride and the experience was so different to that of school outings.

I received a message saying that she had told the people at the location that we had a full time wheelchair user in our group and they had arranged to have people come out to help get him onto the ride. They would take his wheelchair into the office to keep it safe and  would ensure the chair was ready and waiting with a team of helpers when we got back.

That lovely lady had never attended  an equal opportunities course or been on a disability awareness course. She didn’t need it. She was a mum who just did what came naturally. For her, it was easy.

Six weeks went by. We had made friends and learned so much about the different ways of providing an education. Adam was settled, happy and learning in his own way. Somehow we had forgotten to look at any schools.

This strange new way was working. It was unexpected.

So we decided to carry on.

We spoke to Adam. He didn’t seem to miss school at all and when we told him that he didn’t have to go back he was clearly happy.

And suddenly four years have gone by.

You can’t help but notice that Adam is a bit different to most children – the wheelchair gives a big clue and many of his sensory difficulties are fairly easy to see too. Yet at home education groups, he really is “just Adam”. The children and parents involve him and include him without having to think about it. It comes naturally to include everyone and nobody judges anything.

His academic learning is slower than other children and it is really hard work to teach him as well as managing all his care and physical support needs, but it is worth it.

We don’t test, we don’t talk about the levels he isn’t reaching and he isn’t “up against” anyone else. We celebrate his achievements, his milestones and his individual progress.

There are areas where there is no national standard to measure success and, for us, these are the most important areas of all. Adam has friends. He has true friends – the kind who invite you to their home and who call to see if you want to play today.

For a child with autism, that is MASSIVE!

They get him to do things which he finds hard.

Adam does not usually do dressing up but he did it with a most trusted friend.

They encourage him to be bold.

He is happy to be with them on his own.

When he had spinal surgery in November 2014 our house was filled with children every day because most of his friends were not in school. As adults we can do our best to entertain a poorly child but nothing quite matches the entertainment of a group of children who will have a Nerf battle in the bedroom or the mates who immediately start “arm farting” just for the laugh value.

I am forever grateful to the friends who made those days so much brighter.

When we first thought about him starting school it was very important to us that he went to the local mainstream school so that he would make friends with local children and be accepted and loved in his community. We wanted people to see him as just another boy and it was devastating when it didn’t work out.

Yet now I am glad we have taken a different route. Adam is truly part of his local community and spends his life being part of the wider world, paced in a way he can manage. He has made amazing friends and is fully accepted, just as he is.

His friends are all so aware of the need for accessible facilities. I have high hopes that many of these children are going to grow into adults who will change the world for the better, because they are already making a huge difference.

We nominated two of his friends for an award earlier this year. They won and  were interviewed by local press. One of the boys was asked “What is so special about Adam?” and I utterly adore the response he gave.

We may have ended up following a different path but we are on the one we had always sought for Adam. One where he isn’t “special“, he is “just Adam”.