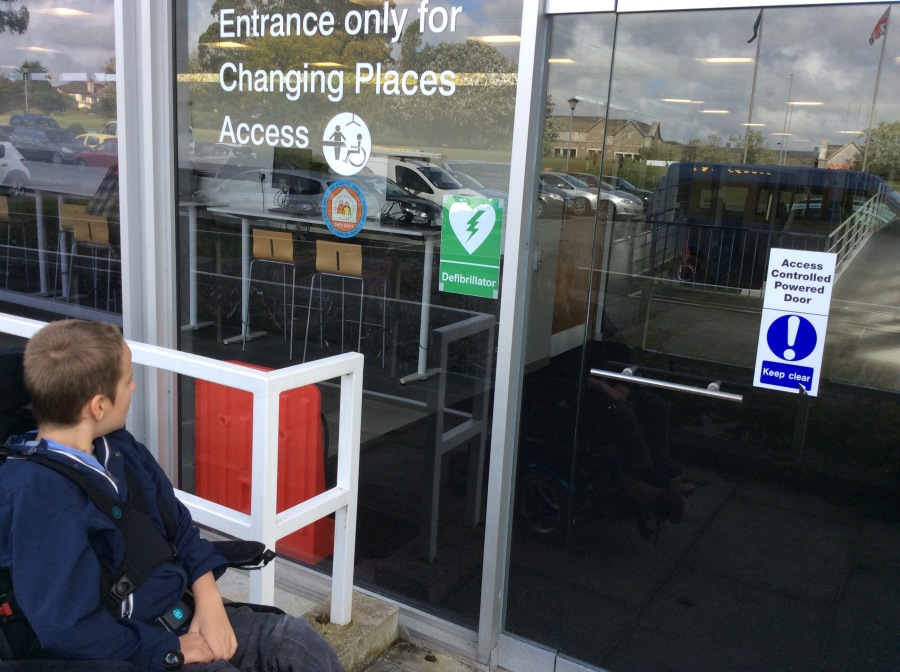 Sometimes, even when things should be okay, they are not.

Sadly, despite a lot of work being done in the park, there was no equipment a wheelchair user could access from a wheelchair. I am thinking that there is scope here for a wheelchair accessible roundabout but that was not the biggest problem today…

Yet, as ever, the simple need to pee gets in the way.

We knew it would happen but we had a plan – there is a Cornwall Council office approximately a  ten minute drive from the park and they have a Changing Places toilet so it was going to be possible!

At 2:40pm Adam needed to “go”. So we told our friends we were “popping to the toilet”. Oh yes, I know I should never have expected it to be easy but it felt possible.

It took us ten minutes to get back to the car and secure the powered wheelchair. It then took ten further minutes to reach the council offices. I was very pleased that they have a dedicated parking space for people using the Changing Places toilet and the entrance was clearly signed.

Although it was not obvious how to open the door.

We were a little stressed at this point. You may have experience of how it is when a child tells you that they need the toilet – they usually mean NOW!!!!! 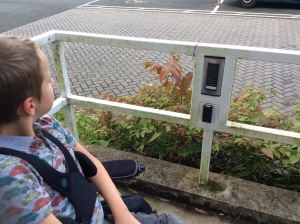 Just as I was about to head to the reception desk I spotted a button opposite the door. A sign pointing it out would have helped.

We went in and were very  impressed that the  door opened at the touch of a button and closed at the touch of another button! Many people who need these facilities don’t need a carer so don’t have anyone with them. Have you considered how hard it is to open doors if you don’t have great arm strength? 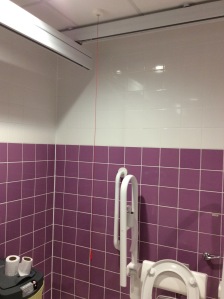 Once inside we found another difficulty.

The emergency pull cord by the toilet gets in the way of the moving bar of the tracking. As I moved the hoist towards Adam the cord got caught and set off the alarm. I was pleased that nobody came running whilst also a little bit concerned as I am sure that is what the alarm is meant to do!

As I moved the hoist away from the point where it set the alarm off, the cord dropped into the toilet. I was hoisting Adam at the other side of the room so couldn’t stop it but it shouldn’t have happened. It should be better set up. Having the rails the other way round in the room would help.

Eventually I found a position where I could get Adam onto the bench and across to the toilet without either setting off the alarm or dunking the emergency cord in the toilet. We were looking forward to getting back to our friends but, as we moved back to the changing bench, the hoist stopped. Completely! It would not go up or down so I had to lift him onto the bench and support his body in a sitting position whilst disconnecting the toilet harness. I was hoping that the hoist might just be low on charge and that maybe a few minutes on the charging point might make it work. I was wrong.

So I called my husband, as he knew people who worked in the building, and he arranged for someone to come to help us. Adam does not like strangers touching him so it needed to be someone he would hopefully be confident with. It helped him to know that it was a friend of Daddy who was coming to help.

She was a lovely lady and helped me to lift him back into his chair. With my back problems, I should not be lifting him. It is not good for Adam either. His right hip and his left knee dislocate constantly and both are painful, but sometimes you just have to do what is needed. This was one of those times.

By the time we had sorted everything, washed hands and got back into the car we had lost another hour from our day out. By this time I didn’t really want to go back to the park, but I had promised Adam, so we drove ten minutes to the park and then took another ten minutes to get out of the car and back to his friends.

One hour and forty minutes to have a wee!

Would your child find that reasonable? Would you?

According to the sign the toilet had been checked twice that day, yet is seems that nobody had checked that the hoist was correctly in the charging position.

Even more that that, I am hopeful that the “Cathedral City of Truro” will have a Changing Places toilet installed in a more central and much more useful position.

All of our friends were able to “go” using one of the many toilets in the park. They could also have used a number of toilets between the park and the council office.

Adam was enjoying himself today. He loved being with his friends. He should not be disabled by a lack of adequate facilities.

There has since been a response to my email complaint.

You really need to read it yourself to believe it!

Oh , what a response!