Those are the most awful words I have ever heard from my child and those words are why I am trying to make the world a better place.

Adam was almost six years old and had already spent over a month in a cast from his chest to his ankles, with legs spread far apart and a wooden bar between them. He had suffered an injury at school which had required surgical correction. 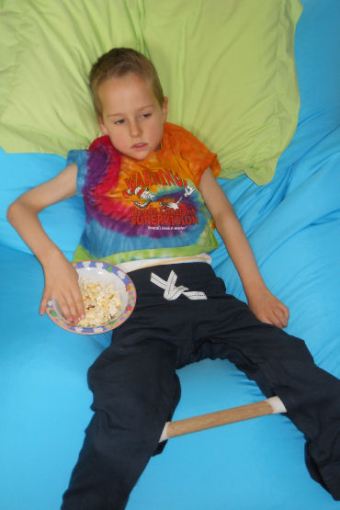 He had no independence.


He couldn’t roll, he couldn’t sit up, he could not sit in his wheelchair and had no independence. 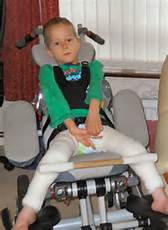 People tried to make it better.

Our physiotherapy team hired a Chunc Spica Chair so that we could move him around but, to Adam, it was on oversized pushchair and he still couldn’t move it himself.

I had never realised  that a child could feel so low.

Adam struggled a lot with speech back then. He still struggles to explain his emotions. Yet he really couldn’t have said how he felt any more clearly.

After several weeks like this, he was so sad all the time and on this day he just spat the words out at me.

Life was holding very little value for him at that time. He didn’t know how much longer this ordeal was going to last.

The weeks must have felt like forever to him. Having every last shred of his independence taken from him just took too much. My child was sad. I would go so far as to say he was depressed. I never knew that such a young child could feel so low.

It took a year to get him back to good emotional health.

Four years on, he is almost 10 years old and there is a brand new shadow threatening his emotional wellbeing.

A shadow which really doesn’t have an end point.

A shadow over which I have no control.

How would you feel about yourself if you were the only person in your group who couldn’t do something? What if that thing was something as simple as using the toilet?

Would your heart break if you couldn’t have a day trip to the zoo with your friends because you couldn’t stay all day?

Would your heart break if you had to leave a restaurant before you finished your main course, just because you needed the toilet?

Would your heart break if you couldn’t just arrange to join your friends for bowling and a meal because you knew it would end in up with you needing the toilet and having to leave?

Would your heart break if you couldn’t go to the theatre because there was no toilet you could use?

Would your heart break if you couldn’t go on a shopping trip for the whole afternoon, let alone a whole day, simply because you would need the toilet?

What would happen to your heart if you explained these difficulties to your local cinema, theatre, theme park or shopping centre and the only response was that their toilets met the minimum standard required by law?

How much would you love yourself and value yourself now? Does anyone think you are worth anything?

How much worse would it hurt if this was your child?

Does anyone shout out with pride because they have met the minimum standard required?

“Yay, our school meets the minimum standard to be allowed to stay open!”

“Yes! Our restaurant is a bit grubby and we have lots to improve but we meet the minimum standards to be allowed to serve food!”

“Hooray! Crack open the wine, we meet the minimum standards required for ensuring that our ship can sail.”

Nobody strives to “just” meet a basic minimum standard.

So if you receive an e-mail from me (or from anyone else) asking about your toilet facilities, please don’t see it as “picking on you”. Don’t see it as people being awkward or difficult.

See it as an opportunity to help make the world better.

See it as a way to help keep a person going.

See it as the right thing to do.

The Equality Act states that reasonable adjustments must be made before a person is disadvantaged due to disability.

Two simple things. A hoist and an adult sized changing bench raise your standards so much and make it possible for people to live full lives.

I can’t think of a much greater disadvantage than to be unable to do the most basic of things simply due to a lack of accessible facilities.

Don’t let people feel that they are worthless.

No person should want to throw themselves away.

Please CLICK HERE to sign a petition for these facilities to become a legal requirement in large buildings.