We were excited at the idea of watching Pete’s Dragon at the cinema.

We wanted to see the film and it was a bonus that we could see it for free as part of the Into Film Festival. A free cinema trip is a welcome joy for any parent!

There are no Changing Places toilets in the city centre and he knows he was uncomfortable last time we tried. He was also upset that we couldn’t go out to lunch with friends after the film – EVERYONE ELSE COULD!

This morning he woke up, told me he was too poorly to go and then started to do some impressive coughing. He has always had quite a weak cough so I didn’t think he could fake a good cough like this.

Turns out he can!

Not one single cough since I cancelled our booking.

We had a film afternoon at home with snacks, drinks and smiles. Doesn’t look at all poorly, does he?

Not looking that poorly! 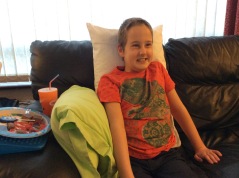 Delighted with snacks and a film at home!

I can’t be cross with him for pretending to be ill. At that point he was so anxious he wasn’t able to put his feelings into words. So he found another way to tell me. Then later, when less anxious, he was able to use the words he had wanted to say earlier.

My 10 year old would rather not go to the cinema than risk such discomfort and sadness, or  worse – an accident in front of his friends.

Wouldn’t you feel the same?

Earlier this year I read something which made me cry. And which still does, every time I think about it.

She said that her father had motor neurone disease and could now only go out with the family if there was a toilet with a hoist. This man who loved spending time with his family was already unable to do so many of the things he had previously enjoyed and was now unable to sit in a theatre and watch a show.

Just because it lacked a hoist and adult sized changing table.

We should all be horrified.

We should all understand that this could be us.

Shortly after this was originally published I was contacted by a man who told me that he had barely left his home for 10 years.

Because the thing my son was afraid of had actually happened to him.

How many adults are trapped in their homes due the same fear?

One day, it could be any of us.