You might have seen us on the news, or heard us on the radio, discussing the legal action that is being taken against our local theme park, Flambards, in Helston, Cornwall.

They advertise using the slogan “The best day of the week” and it almost is, unless, like my son, you need a toilet with a ceiling hoist and adult sized changing table. Can you imagine not being able to access a toilet on a family day out? Especially one you have just paid a lot of money for?

Do you just go to places expecting your toilet needs to be met?

My son, Adam, is 11 years old. He is full of fun and a bit of a thrill seeker. We used to go to Flambards all the time when I could still lift him to the toilet, even though it meant him using a commode in the back of our van. I would lift him from his chair to a folding camp bed, sort his clothes, then lift him to the toilet. And then back again, before having to deal with the “contents” of the commode in a hot car. Yes, it was as horrible as it sounds, but it meant that Adam could still enjoy fun days at his “favourite place in the whole world”.

But then he got bigger, and I got older, as well as suffering back injuries from years of lifting in awkward spaces. All of a sudden, we couldn’t do it any more.

The world started to shrink for Adam.

So I took the soft option. I made excuses for a year as to why we couldn’t go. Quite often, I would tell him it was closed.

But that wasn’t really a long term option. Adam is disabled, he isn’t stupid! He knows that it can’t be closed that often, and he didn’t stop asking.

So I had to think about it and I had to tell him the truth. Thankfully, by now, I was fully aware of the social model of disability and we talked about the facilities needed. And Adam immediately had a great plan – we would simply tell the manager at Flambards what was needed. And Adam was certain that he would want to improve their facilities. After all, why would any good business not want to be the best it can be? And no good business would want to knowingly exclude disabled people. Would they?

The initial response was positive. We were not even the first people to tell them that they needed a toilet with a ceiling hoist and adult sized changing table.

The Equality Act is an anticipatory one. By the time we contacted them they were already aware that they were treating some disabled people less favourably and they really should have already been working on stopping that from happening.

Some further correspondence  brought this response from the manager, “This is something I was looking to suggest as part of the 2016-17 winter work. This would need to be agreed by the directors but I would like to see this provision in place.” and we were delighted. It would mean waiting another season to have equal access to visit the park, but it seemed reasonable to wait till the park closed to make alterations.

However, as the 2017 season drew close, we discovered that there was not going to be a usable toilet with a ceiling hoist and adult sized changing table. But there was going to be a fabulous new ride, Sky-Force, which I am sure cost an awful lot more than the facilities my son was requesting.

A petition for Changing Places facilities was delivered in Parliament recently and the MP presenting it stated that “one in 260 people in the UK need these facilities“.

That is a high number indeed, so please don’t think for a moment that it is just Adam.

We discovered a community interest company, Mobiloo, who provide a Changing Places style toilet facility in the back of a van. 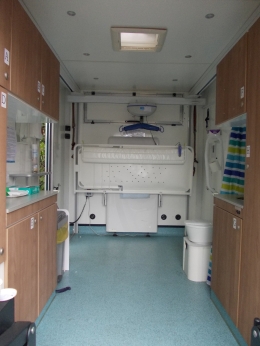 Facilities can even fit in the back of a Transit van.

And we have hired it several times so that Adam could visit his favourite place in the world. And he has had some great times. 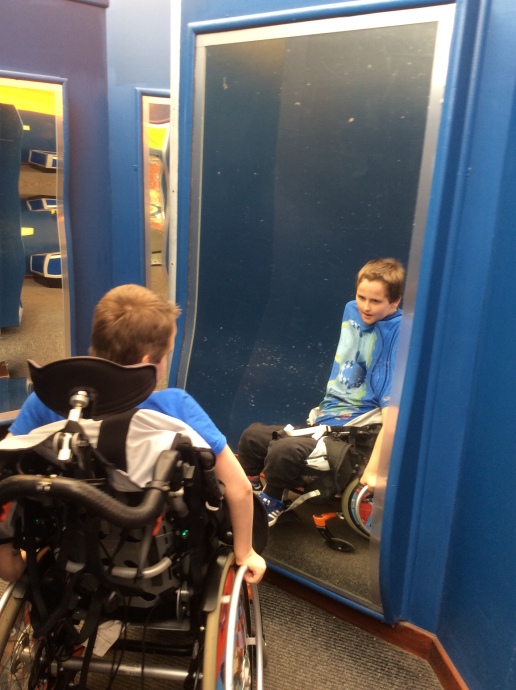 But we should not have to hire a toilet in order to visit a theme park. It is costly, and it takes a lot of organising. We have to hire in advance and, if the weather is horrible on the day we picked, we still have to go. We can’t delay our visit.

The Equality Act is clear that attractions must make “reasonable adjustments” and that the disabled person must not be expected to pay for it.

We have asked Flambards many times. We have shown that there is a need. Other families have used the Mobiloo on the days we have taken it, and when a local charity took it there on what ended up being a very wet day, 8 separate families used it. Those families would not have chosen to go out on a rainy day usually, but it was the only day of the summer holiday that they could go, because it was the only day that Flambards would have safe, usable toilet facilities.

After more than a year of asking, we spoke with a solicitor. Adam thought it was a great idea to get a solicitor to “write them a sternly worded letter”. Again, he was certain that they would want to be inclusive.

After all, it is a theme park!

They have plenty of space.
They had money for an expensive new ride.
Each firework night probably cost more than a hoist and bench.
And the company owns more than one theme park.

And we are only asking for a usable toilet!

We have not asked for a full specification Changing Places toilet. These facilities can be fitted into smaller spaces, and there are companies which have worked out some great solutions for smaller spaces.

But they continued to ignore us. And they were not keen to discuss matters with our legal team either.

So we moved forwards and instructed the legal team to issue court papers. This wasn’t a decision taken lightly. This will be a test case. And it will be followed intently by every family who loves someone who needs these facilities.

When we visited to film for the BBC piece we discovered that Flambards now have a toilet with a child sized changing table. They informed us that they had a mobile hoist too, but it was not in the room as “some people have told us they only need the bench”.

Which shows how little they understand the facilities. They will say that they have made “an adjustment”, but they have a duty to make a “reasonable adjustment” and that would surely involve speaking with the person asking for it?

People should not have to ask for the hoist. And you need a lot of space to use a mobile hoist. The room is not large enough and, many carers, like me, cannot use a mobile hoist to get my son onto a toilet. You are behind the hoist, pushing it around, with a heavy person dangling on the other end. It isn’t safe, it isn’t dignified, and it can’t be done with one carer.

The manager showed me the room, in the presence of one of the Mobiloo team, but he would not allow me to photograph it. We explained why it was not usable for us.

When I said it was too small, he said that they could move a wall to make it bigger. Matt from Mobiloo praised them for trying and asked if the ceiling would take a hoist. Richard Smith, General Manager of Flambards, said that there were ceiling hoists which used the strength of the floor instead.

So they have identified a solution whereby a toilet with a ceiling hoist and adult sized changing table would fit, but they just don’t want to do it.

A local charity, BF Adventure, is currently installing a Changing Places toilet. It is costing just under £9,000 and they started working on it as soon as they knew it was needed. They had previously hired in the same equipment which Flambards has hired. But, as soon as they learned that it was not safe for Adam to use, they looked at what was needed. And did it!

Flambards had a choice. They could have used their funds to install a ceiling hoist and adult sized changing table into a toilet. They have had almost TWO YEARS to do so. But, instead, they have chosen to put their efforts into battling to avoid including all disabled people.

They are not prepared to install a toilet with a ceiling hoist and adult sized changing table but they are prepared to battle in court to tell an 11 year old child that he is not worth providing a usable toilet for.

How sad is that?

29 thoughts on “Why my 11 year old served court papers to Flambards theme park.”