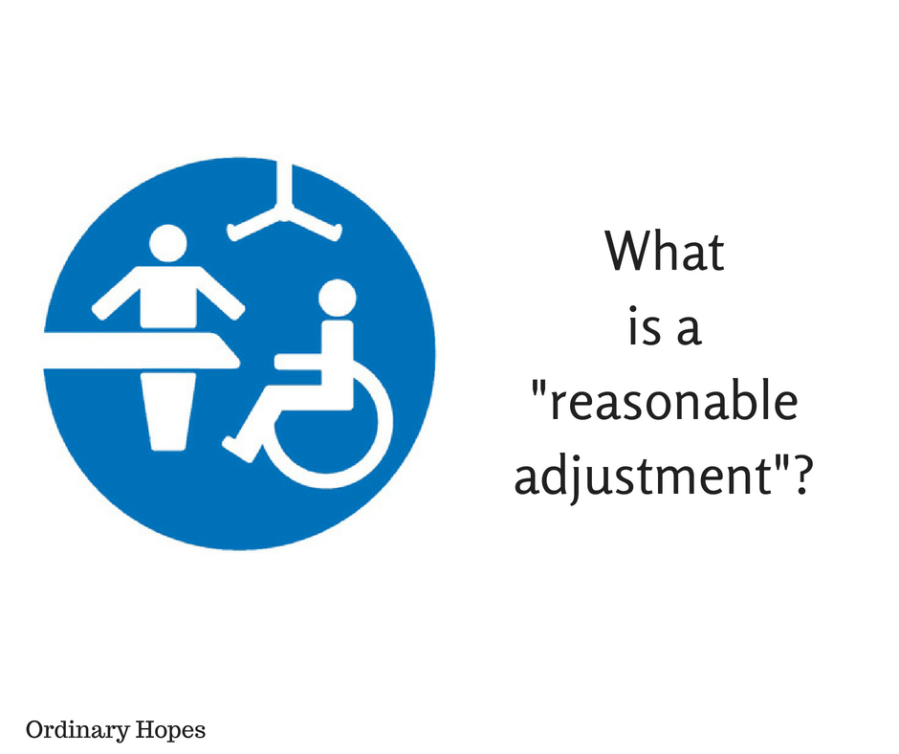 The Equality Act brought together many separate pieces of legislation into one single Act, designed to protect the rights of individuals and create equality for all.

The Act states that there is a duty on organisations to make “reasonable adjustments” if a person is placed at a substantial disadvantage due to disability compared to non-disabled people and those who do not share the same disability. It is clear that “substantial” means “more than minor or trivial”.

It is intended to ensure that disabled people can access education, employment, housing, private clubs and goods and services, including shops, hospitals, cinemas and tourist attractions (to name a few) in the same way that non-disabled people would expect to.

But what counts as “reasonable”?

“Adjustments only have to be made if it’s reasonable to do so. What’s a reasonable thing to ask for depends on things like:

– your disability
– how practicable the changes are
– if the change you ask for would overcome the disadvantage you and other disabled people experience
– the size of the organisation
– how much money and resources are available
– the cost of making the changes
– if any changes have already been made.

Adjustments can be by way of changes can be to the way things are done,  or by providing extra aids of services, or by changing physical features.

The Equality Act is an anticipatory one – there is an expectation that organisations must be looking ahead and striving to improve before a person is treated less favourably due to disability.

So it seems straightforward…

Places should be looking ahead and taking action so that no person is treated less favourably due to disability and that they should do whatever is possible within the size and scope of the organisation.

But people who rely on Changing Places toilets (put simply, a toilet which also has a ceiling hoist and adult sized changing table) often come up against businesses which will ignore their requests entirely.

Which is what has happened to my son, at a tourist attraction which he calls “my favourite place in the whole wide world”.

For people who require Changing Places toilets there is no test case (yet) to use as insight as to what is likely to be considered “reasonable”.

Because, for too long, people have been afraid to take a legal challenge.

Let’s face it, talking about the need to access a toilet isn’t really something many of us would feel comfortable doing, and certainly not if you had to discuss what happens when you cannot access a toilet.

Where do you begin? How do you fund legal action? And what happens if you don’t “win“?

Because, for Changing Places users like my son, who is arguing for the right to access a toilet at a tourist attraction, not “winning” would mean that the law was saying that they had no right to expect equal access to a toilet. One of the most basic bodily needs.

Not “winning” would mean they were being told that they actually mean less than able-bodied people or those disabled people who are able to self-transfer to a toilet.

Not “winning” would possibly be too much to take.

A few weeks ago I took a phone call and my son asked who it was. I explained that it had been his solicitor. He beamed at me and said “have we won yet?” and I ached inside.

Because they have already taken something huge from my son.

In ignoring him for almost two years they have told him that he is not worth making a toilet accessible for.

They have placed him in a position where he had no option but to take legal action for a Judge to decide whether it is “reasonable” for him to expect to use a toilet during a day at a tourist attraction where he has paid full entry, just like everyone else, and where everyone else expects to stay all day with their toileting needs being fully met.

Personally, I think it is the latter of those options.

Because they could have invested in installing a toilet with a ceiling hoist and adult sized changing table which would have helped many people and their families. But, instead, they invested in a legal team to defend their walls and keep a disabled child out. And my son is not the only person needing them.

A petition was delivered to the government recently, and the Minister delivering it stated that “one in every 260 people needs a changing places toilet”. That is a large number of people.

But, really, nobody should have to petition for the right to access toilet facilities safely and with dignity. And it shouldn’t need a Judge either.

7 thoughts on ““Reasonable adjustments” – does anyone know what they are?”